I learned a lot about photography on this trip. For example, I learned that ONLY A FUCKING IDIOT would use an old UV filter that she’d never used before ON THE TRIP OF A LIFETIME JESUS FELICITY YOU IDIOT. I also learned that this same exact moron SHOULD MAYBE NOT USE WEIRDASS FILM THAT SHE’S NEVER USED BEFORE and then when she develops it? She should NOT put two different kinds of film in the same canister, sorta split the difference in developing time and hope for the best. ARGH! In other words, prepare for some blurry damn pictures with weird splotches on them.

Which, to be honest, is what I actually like, so the artsy part of me is quite happy. The weirdness makes it art! It’s art now! The part of me, however, that secretly yearns to actually be a National Geographic photographer dictated the first paragraph. Anyway! Let us start out with some fabulous weirdness from the Holga!

Holga dogs! I tried and tried to get a picture of these street dogs. They hung out right at this corner by the mercado and one day they had puppies with them. It’s crazy – I was actually really spooked out by the street dogs, even though I love dogs and have two of my own. I was afraid to try to get to close to take their picture, even though I so wanted to and they seemed completely chill. 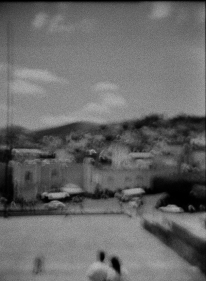 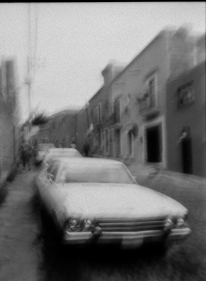 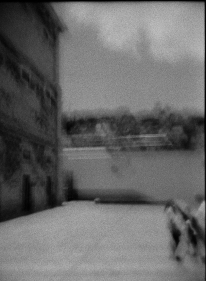 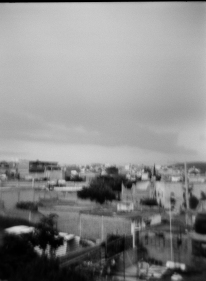 And now, a color burst from the Lomo fisheye. I love this little plastic camera with all my heart, it just never fails to come up with the best shots. And, mixed in because I cannot get it to give me another gallery (what my blog has in common with the art world) we have some of the black and white completely analog I developed it my very own self shots from my beloved Praktica. Those would be the ones with the splotches and the blur. I may add some later if I succeed in making a negative scanner out of reflective poster board, which I am totally going to do. . . uh. . someday. Soon. Meanwhile, enjoy some film! 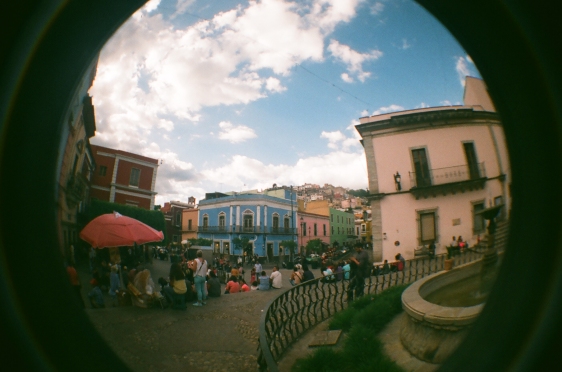 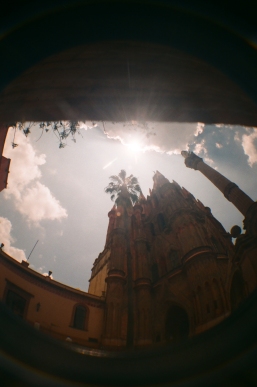 San Miguel de Allende. I can’t remember what this building is. This is one of the blurry ones resulting, I am pretty sure, from the aged and crap UV filter I put on my lens because I am an idiot. 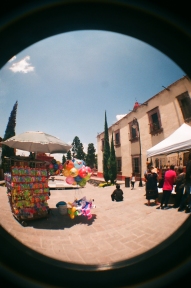 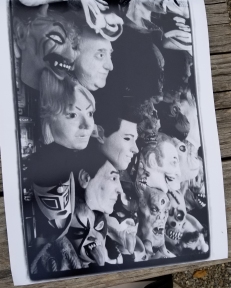 Street performer in Guanajuato. Susan got him to pose with all of us and with all of us his hand is artfully poised just over the boob. Ha ha! So humor! Actually he seemed like a nice enough guy; he gave me his card. And I really like the way the picture came out. 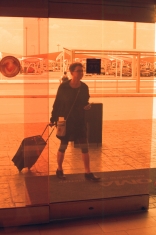 We had a five hour layover in Monterrey, where the airport doors are this astounding shade of orange. This was the last of the color film from the Praktica and I just love this so much. The center of San Miguel. This is I think Retropan film – it’s either retropan or lomopan – and the splotches are an unfortunate artifact that can be kindly referred to as Felicity doesn’t know WTF she’s doing in the darkroom sometimes. Anyway, El Jardin is a hopping place, full of tourists, locals, balloon sellers, hat sellers, etc. 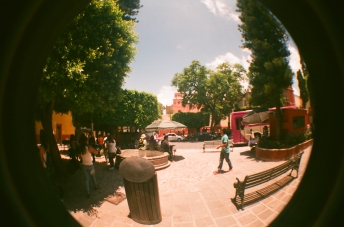 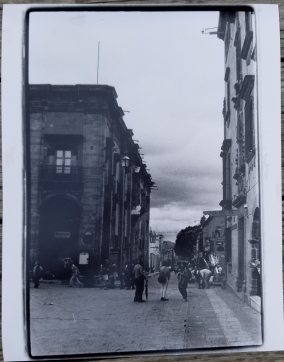