Today I went to Petrified Forest State Park. Today also marks exactly six weeks since I left Asheville, which I hadn’t quite realized until tonight but there you are: SIX WEEKS. It feels like both much less and much more, simultaneously. It feels – odd.

Petrified Forest was great. I really loved it. I wish I had gone ahead and spent more time there and then just spent another night at the gift shop. The gift shop, by the way, was also great. I (of course) bought some Christmas presents and spent an hour wandering slowly around marveling at the crazy range of useless objects that can be made out of agate. Also they had some quite nice Native American pottery and I salivated over that for a while. I like stores that carry both plastic dinosaur heads AND $10,000 Hopi pots. Then it was off to the National Park.

Petrified Forest. I was excited! I have heard of it all my life but, of course, never been and I sort of thought it would be a forest, only made all of stone – I suspect this idea came from my inner six year old. So even though I knew better, I was still kind of expecting a huge stone forest full of dinosaurs. Spoiler: it’s not a forest. It’s a desert with incredible, but incredible views of wild beautiful freaky mountains and hills and dunes and, hell, I don’t even know what you call them, mesas, I guess, buttes, that are all layered and different colors and, damn, it does not look like earth. And, there is petrified wood just lying around everywhere, looking deceptively like real wood until you get up close and LO it is stone. But the petrified wood, oddly enough, isn’t really the most amazing part: that’s the landscape. And the dinosaurs. They’re still there, only they’re black and feathered and completely unabashed about demanding snacks from tourists. 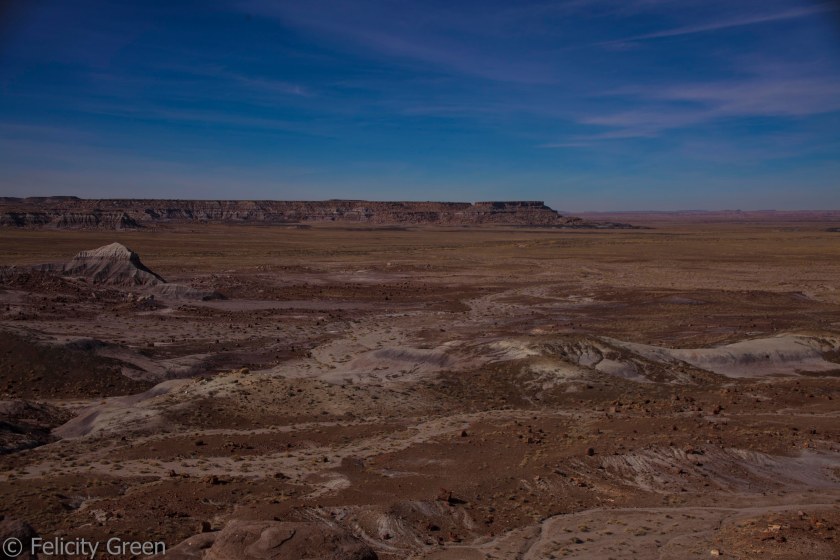 Not to say that the petrified wood isn’t astounding. The Crystal Forest part of the Petrified Forest (a lot of these names were clearly dreamed up in the early part of the 20th century when irony had not yet been invented: a simpler time) where most of it is concentrated is totally cool because it actually looks like the bottom of a prehistoric swamp – which is what it is – only stone and dry. Or, well, it looks like the bottom of a prehisotoric swamp that Fred Flintstone has been through with a chainsaw. I somehow don’t think nature sawed all those fallen stone trees into neatly segmented logs so that you can peer at their innards and marvel at the agate within. Still, petrified wood! It’s totally fucking cool! The pathway takes you carefully around the primeval swamp, stone logs everywhere, gray sand and green sand* and red sand, and damn, it would be sort of an great place to drop acid. Suddenly that small group of teenagers I kept running into makes more sense. 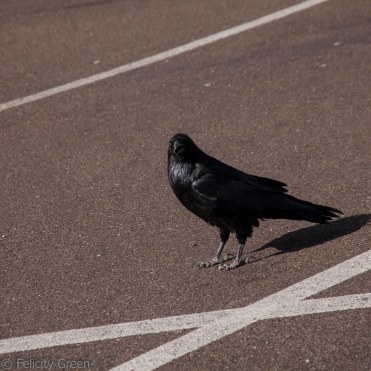 Petrified Forest is basically a road that runs between I-40 and Rte. 180. There are lots of scenic overlooks and trailheads and stops – although not enough; there were several places I really wanted to stop and take pictures and couldn’t – but it’s essentially a road. I stopped almost everywhere. The landscape! The colors! The shapes! You keep going over these wild dune sort of things that are like the back of some huge primeval monster, a brontosaurus the size of a city. Lots of fossils have been found in Petrified Forest – they have a bunch in the visitor center, hurray, dinosaur bones! I love dinosaur bones! – and a lot of them were found in the 20s by two women paleontologists. This was delightful news. They even built casitas out of petrified wood a bit further on in the desert, or at least I think they did, but alas by that time I was sort of hiked out.

I was also in the middle of my own raven encounter. At the stop by the Petrified Bridge, (which is a stone log between two cliffs that would be much cooler if it had not been sort of half assedly “fixed” with concrete in the teens or twenties; there’s a lot of early/mid 20th century stuff in Petrified Forest; apparently it was a super big deal back in the day) there was a raven in the parking lot who was clearly used to demanding and receiving tribute from the tourists. I took a bunch of pictures of him – or her – and then, I could no longer resist: I gave him two almonds out of my bag of trail mix. They were a big hit. He liked almonds. He liked them so much that he called his mate on down from the sky and they both advanced on me, like, MORE ALMONDS. I felt bad. I know better. Not only was the visitor center full of signs telling you not to feed the animals (they have plague, the signs said, and hantavirus and they will bite you) but I also know the real and good reasons not to feed wild animals: 1) because it will take away their fear of humans, which will eventually get them shot by an asshole and 2) because they will get accustomed to human food and starve without it and 3) because it will likely make them sick: wonder bread is no better for animals than it is for people, hello. So I knew I was wrong and yet, I did it. I gave the ravens some almonds. Organic almonds, mind you. Unsalted. But still. It was wrong but it did make us all happy for that moment. Then I said goodbye to the ravens and thanked them for modeling and headed on my way.

I stopped at the next stop area and took pictures of yet another raven, this time without bribes. Then I came to the stop area with the Petrified Pueblos or, actually, I think they’re called Puerco Pueblos, but, whatever, I wanted to see them. So I got out of the truck and as I did two ravens circled down, gronked happily at me, landed directly next to my truck and camper and hopped on over to me. ALMOND LADY! They said, or might as well have said, WE FOUND YOU! WE LIKE YOU! BRING OUT THE ALMONDS! My almond ravens. They had indeed found me. And I was out of almonds and also, I thought oh god, the ranger is going to come by any minute and put my ass in ANIMAL FEEDING JAIL because they’ll be, like, “Ma’am, you’ve seduced these ravens with almonds and that is a FEDERAL OFFENSE.” So I was scared. And also thrilled because THE RAVENS LIKED ME. I did not entirely know what to do.

Anticlimactically, this problem was solved for me when a dude across the parking lot started feeding them potato chips with no guilt whatsoever and they abandoned me without a second glance, fickle dinosaurs. So I decided to drive on and told myself I would stop by the pueblos on the way back. But it was not to be. I ended up going only one way and I sort of regret it.

I got stuck at the Painted Desert Inn. That is a completely cool renovation and restoration of an historic small inn from the 1920s that was in operation on and off through up to the early 60s. It’s beautiful and they’ve done a great job restoring it: if you’re into old architecture, as I am, and mid century stuff, as who is not, it’s a great stop. They also have local Native craftspeople demonstrating their art. That should be wonderful too and it probably usually is, but unfortunately I sort of got corralled by a weaver’s grandson with a prepared and lengthy spiel that merged into a hard sell and I couldn’t politely get away. I suppose I should be flattered that anyone might think I could afford a real Navajo rug – it is to laugh! – but honestly while the work was beautiful and parts of his talk were interesting, I felt trapped and my precious time in Petrified Forest ticked far far too rapidly away. Perhaps I will go back some day. If you go, bring almonds.

* Green sand! It isn’t entirely green and it isn’t entirely gray: what it is is the color of dinosaurs in educational 1960s and 70s children’s books and museum signs. I think I have found the source of what I’ve always thought of as Brontosaurus Green here in Arizona and it fills me with glee to imagine the mid century illustrator who looked around this desert and thought, well, I’ll make the Brontosaurus THAT color and the Tyrannosaurus Rex THAT color.

First 18 days of January, starting with the trail by the fish hatchery, continuing through what I like to think of as “Elk ladies who lunch after mass”, a rain squall coming ashore, purple clouds over the river and ending with two crows yesterday at Clatsop Spit. My favorite are the sanderlings in the middle. 😃remember any of these can be printed & yours to own, consider this exciting possibility! and /or I have a tip jar here ko-fi.com/flissvert- I hate to ask, but my long lens needs sand extraction surgery and it is not gonna be cheap. Your donation will help bring back actual clear pictures of bald eagles! 😝 #oregoncoast #naturephotography #canonphotography #landscapelovers #waterfall #birds #birdsofinstagram #birding #ocean #clouds #astoriaor #columbiariver #elk
#latergram from last May - more beach eagle action! 😝 here’s an eagle actually catching a small fish and then bringing it back to shore. This is about a mile? Maybe 2 miles max from the ocean beach where I saw the eagle yesterday. Could be the same eagle! Not the greatest pictures ever, did not have my good long lens on so they are cropped way down, but still, here is a #baldeagle fishing in the #columbiariver , always a sight to see! 😎 #naturephotography #wildlife #birding #birdingphotography #canonphotography #raptorsofinstagram #eagle #oregoncoast #pnwonderland #astoriaor
Winter storms & king tides bring up a lot of driftwood and kelp. . .and plastic. ☹ I pick up as much trash as I can carry every day I'm there, and sometimes it just feels so futile. Here, 1) today's catch, 2) a beach view, - how much plastic can you spot? Its like playing Wheres Waldo only more depressing - and 3) a short non trash focused video because not all is bleak. #ocean #trash #plastictrash #cleantheocean #oregoncoast #beachcleanup
Here are 2 first thing in the morning phone pictures of my cat Okra who feels that if I am unforgivably not making breakfast already I should at least be petting her. 🤣 #catsofinstagram #cat #siamesecat #oldfatcat #phoneography
I have had this phone since last March and I only just now discovered it can so slow motion videos! Therefore I present to you today's walk - only slower! Some of it anyway! 🤣🤣😎🐕 #dogs #beach #dogsonthebeach #slowmotion #unheraldedworkofcinematicgenius #oregoncoast
A picture perfect New Years Day hike at Cape Disappointment - the omens say the year is going to be volatile; in the hour and a half we were there i saw 1) blazing sunshine 2) clouds and fog 3) pouring rain 4) high winds 5) a little hail so it was an exciting walk, is what I’m saying. 😄☀️🌦🌤🌧⛅️⛈💨🌪🌈 #washingtoncoast #beach #walkonthebeach #lighthouse #clouds #postcardperfect