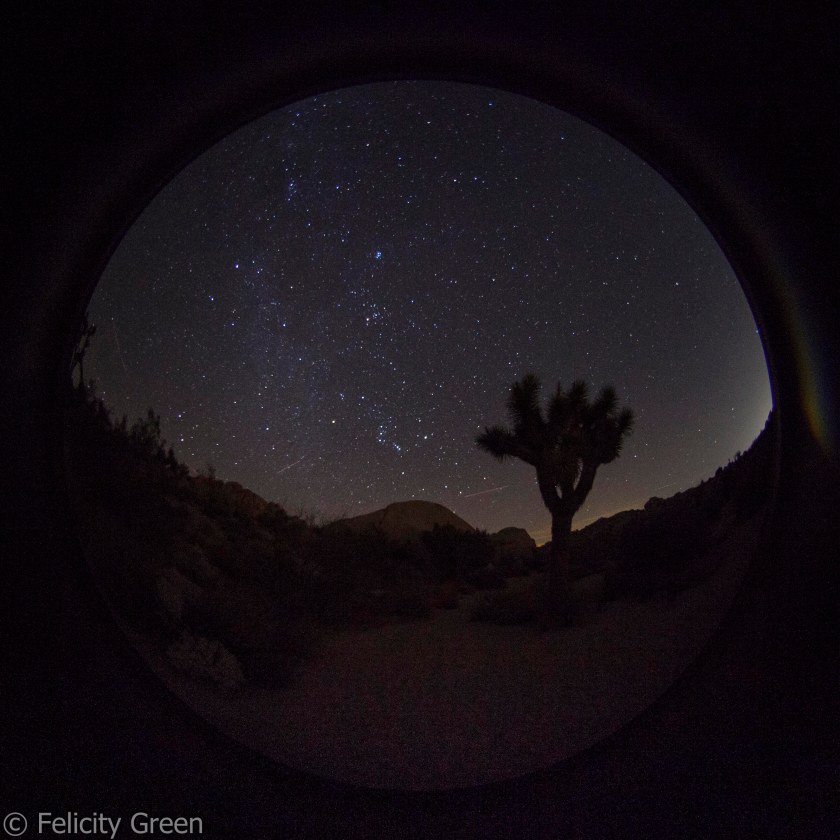 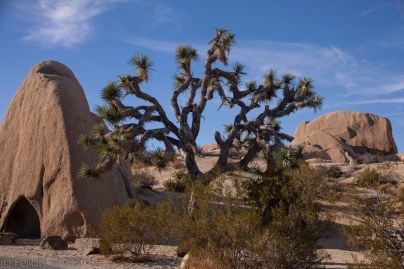 I woke up this morning in the KOA and the wind was still blowing. I started freaking out, of course. Anxiety is a weird thing and it’s exhausting as hell to spend several days fighting with your own brain. But WeatherBug told me it was nothing to worry about and I finally caved and took my damn medication, which, of course, I should have done yesterday. Within half an hour everything was fine. I no longer wanted to throw Garmina out the window. I was calm and efficient and cheerful. I got on the highway and it was also fine. I got to Joshua Tree by noon and here I am and, guess what? It’s FINE. Actually, it’s quite a bit more than fine, it is completely amazing. I was in a happy daze all afternoon wandering around taking pictures of rocks. . and trees . . and rocks. . and rocks with trees. . . and trees with rocks. As is the nature of the West, neither the trees nor the rocks are anything that anyone raised in the East would recognize as such without coaching.

There are ground squirrels here! At the visitor center / gift shop I bought a helpful booklet on how to recognize animal tracks and scat (which is an ecologically okay way of saying shit) and so I was able to identify them instead of being, huh, them’s purty lil’ rats. See, I threw some coffee out the back door of the camper. I know this is not the most ecologically correct way of disposing of my coffee but a) it’s a paved road and b) I am discovering that Joshua Tree is, like, PARTY CENTRAL for a certain subset of California youth, some of whom are doing boatloads of mushrooms two campsites down,* so I think a little coffee is not a big deal comparatively. Anyway, I wasn’t worried about it until I saw the ground squirrel sampling it, right by the door of the camper. They are adorable, by the way, even if you, like me, dislike regular boring old fashioned eastern tree squirrels (which they also have here, or at least they’re in the booklet.) But there this one was, right by my back door, drinking coffee for all the world like any hipster. Another one came to join in on the fun. The first one got huffy for a minute but then decided to share the bounty – the black coffee bounty. They were really slurping it up and I got a little concerned. “You’re squirrels, guys.” I said gently, “You don’t need caffeine.” They goggled at me and ran off – fast. Lightning fast. – and so if there are problems with ground squirrels tonight at Joshua Tree bouncing off the rocks and such or if they start showing up at Starbucks, I know nothing about it.

Joshua Tree! It is the desert! Again! Only THIS desert is made of huge crazy rocks. It’s a lot like City of Rocks except about ten or twenty or a hundred times as big. It should be called Empire of Rocks. The eponymous Joshua trees are very cool – I’ve been seeing them through the desert for a while now and wondered what they were. Now I know! And when I have wifi I will find out why they are called that. I figured for sure it would be in the newspaper map thing they gave me at the Visitor Center but it was not. The shrooming kids had a deeply philosophical moment wandering by while they talked about their friend Josh and . . and Joshua Trees, man. . . and because Josh, you know, like a tree, was like REHYDRATED. “Are they really named after Josh?” asked the weeping girl (I’m not going to ask and I’m not going to offer to help, either. There are four of them and they’re at least nominally adults. Some people cry on hallucinogens.) and nobody was quite sure. I’m curious about Josh and his miraculous rehydration (slightly, and I’m 99.9% sure the trees are not named after him although, I suppose, he might be named after them) but again, I’m not curious enough to ask. It seems like just yesterday I myself was a high as a kite young person! I remember it! Some weird old lady asking me questions would not have gone well. At least they are relatively quiet and probably not going to freeze to death. We never did.

I chatted briefly with a lovely gay couple when they wandered by my campsite and later when I wandered by theirs. “There’s too many pretty things to take pictures of!” one of them said, laughing, and I said, “I know! I need more depressing urban detritus!” Then they told me that in the BLM free camping lands (the very places I have been too chicken to camp as of yet) the bushes are all festooned with toilet paper. . . used toilet paper. Perhaps I will remain too chicken even though I can’t, actually, afford to remain so squeamish.

I saw three ravens. Actually, two ravens tried to get me to go to this one campsite but I didn’t listen to them and ended up here at campsite 90, which is an AWESOME campsite I feel guilty for not taking full advantage of. I should have gotten some firewood or something for the fire ring but instead I’m just parked next to it. My tripod is out there though, bravely holding the fort and waiting for me to shoot some more star pictures. I took some AMAZING STAR PICTURES this evening and I am happy. Hopefully the ravens are not offended.

When I was walking to the edge of the campsite to pay my camping fees – $15, which is fair for dry camping! – an entire giant red and gold tour bus – Super Travel Agents, We Take Care of Everything – stopped and two young guys hopped out and asked me if there was somewhere in this parking lot they could put their bus. “Um,” I said, “It’s a campground? Not a parking lot?”
They were unfazed.
“Well,” I ventured, “It seems to make a loop? So you probably won’t get stuck? Maybe there would be somewhere you could put the bus?”
They were pleased. “Was there a trailhead?”
“Yes,” I said, “That way,” and they hopped back on the bus and headed that way.

I think the bus was full and I wish I had followed it and photographed the bus people heading out on the Skull Rock Trail. It’s supposed to be an easy trail – I’m planning on it myself tomorrow, as well as possibly an old mine if I can get there on foot – but I suspect that whole bus was full of old people who may not have been prepared to hike through the desert. Certainly their tour guides were a little less than prepared. I liked them, though, and I kind of adore the whole idea: huge tour bus full of seniors! Two young kids who have sold themselves as guides, don’t know anything at all about the area but are totally prepared to wing it! Oh gods, I am in California, aren’t I? The scripts, they write themselves.

Later, an Australian couple would also ask me for directions. I was less helpful, alas. I don’t, you know, actually live here although apparently I look like I do. That could be considered complimentary or, well, not so much. Weathered desert rat! But, either way, it’s so nice to be back in the desert, back out in the wild spaces. I’ve had a bit too much town lately; it’s good to step back outside.

*I know they were shrooming because they were talking loudly about it as they walked by. I don’t look like a cop, I guess.