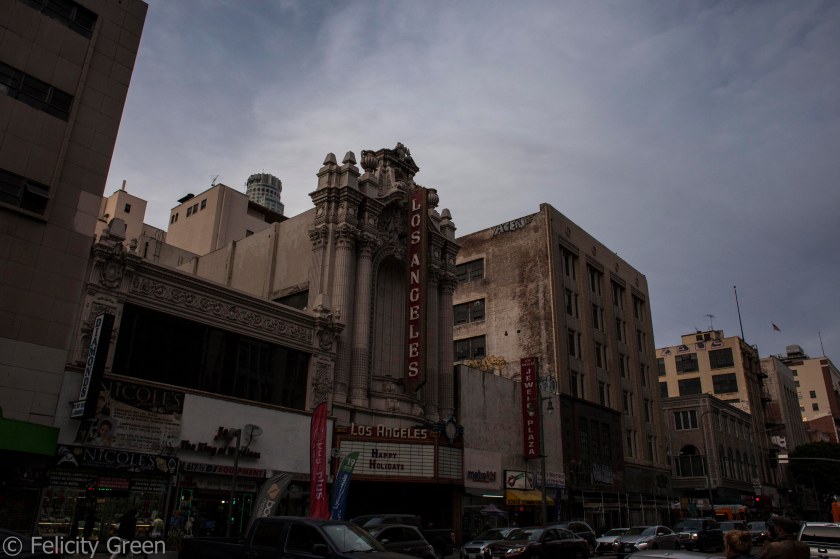 Los Angeles is big. No, I knew that too, but I didn’t know just HOW big it is. It’s seriously big. It’s Douglas Adams explains the size of the universe big. It’s so big that you can drive for miles and never leave LA, just like Michelle Shocked said. It’s even bigger, actually, than it says it is, because Los Angeles, somewhat like me in a shoe store, charmingly insists that it’s smaller than it really is, as small as it was many years back. Los Angeles says that places like Pasadena and Glendale and Burbank are completely different cities – and they say that too – but, I’m sorry, I must disagree. They are the same city, the same almost infinitely large city. If there’s no break, like, not even a mile of empty fields, just a city that goes on and on except for a sign that you might well miss, than no, that’s not a different town: that’s a neighborhood. Which is all to say that LA is so enormous that it contains multitudes and so all I can offer are little glimpses that I hope add up to a whole, like neighborhoods in a giant city.

LA is bordered by giant mountains, which I somehow wasn’t expecting. I don’t know what it is, I can peer closely at maps and note that they look like wrinkled laundry but yet it doesn’t percolate through to my brain that yo, mountains there. I am used to mountains; Asheville is also bordered by mountains but they’re different: they’re gradual. The laundry is not so wrinkled. The mountains outside LA are abrupt, man, they are just there like huge vertical walls of rock, unsoftened for the most part by vegetation. Some of them are black from fires. I was surprised that there weren’t any skeletons of huge trees – in western NC, after the forest fires, there were lots of blackened dead trees. But not here, because, of course, there were no trees to begin with. Duh. My friend Emily had to explain this to me,

gently, in words of few syllables, because even though I had just spent weeks in the desert, still the concept of mountain that does not contain tree is hard for my effete eastern brain. In Pasadena, where I stayed for a few days courtesy of my super awesome friends Emily and Jon and their lovely calm dog Allie and their crazy delightful dog Anubis and Pancho the cat, the mountains look like they’re at the end of the street. It really seems as if you would drive to the end of the block and BLAM you shall not pass: it’s a wall o’rock. But they must be further away than they appear, because I never banged into them.

Years ago an ex told me that you could eat for free in LA. There were avocados all over the sidewalks, he said, and oranges, and even more avocados if you could climb fences quickly. I did not see any free avocados, alas, but I saw what I think was a mango tree with a parrot in it – I have no idea if they were really mangoes; it was up high and I have no clue how mangoes grow, but it was most definitely a parrot and it was eating fruit that certainly looked mango like – and there were free lemon limes everywhere, or at least in front of Emily and Jon’s house. They told me they were actually limes, but I didn’t believe them. They’re lemons, I thought, I have seen lemons before and I know they are lemons, but okay, they want to say limes, it’s their lemon trees. So I took a bunch to my brother – he had a bad cold and needed lemons – and he asked me why they were blue inside. Blue? I said, and looked, and okay, not really blue but definitely sort of teal. Aquamarine. Huh, I said, perhaps they are Meyer lemons. I had heard of Meyer lemons but I’d never seen one. So I did some googling. Nope, definitely not Meyer lemons: they were in fact actual LIMES. It turns out that if you leave limes on the tree long enough, they turn YELLOW and their skin gets smoother and damn if they don’t, basically, turn into lemons. It is the freakiest thing! Who knew? Not, clearly, me. So I made a key lime pie out of them and it was delicious.

My brother’s apartment is in either Echo Park or Silver Lake or Atwater Village, but not in Glendale, although it’s really close to Glendale. I couldn’t figure it out. Much of LA is composed of neighborhoods that aren’t unlike West Asheville: there is a long commercial strip and then about 8 to 10 blocks of small houses, most of which look like they were built in the 20s and 30s, interspersed with some slightly larger, slightly later apartment buildings. A lot of them have gardens with absolutely amazing cacti – huge cacti, like maneating cacti, it’s so great, I want nothing more now than a little stucco house with a giant carnivorous cactus and a lime tree in front. Then there is another commercial strip and so on and so forth. Sometimes you end up in a neighborhood with much bigger houses. Sometimes you end up in Los Feliz and then you get the Eels song stuck in your head for hours. That sort

of thing goes on – names out of legend! Hollywood! Vine! Movie references! Music references! And yet they are just streets. – until you arrive in downtown LA, which looks like New York City except for the palm trees and the occasional art deco facade that says HOLLYWOOD on it. I couldn’t tell you anything about the transition from neighborhood to skyscrapers because I was too busy trying hard not to die on the freeways. The freeways! They are everywhere! They are not, actually, different than the roads I have always called highways or interstates, by the way. I didn’t really think they would be but I sort of wondered. Still, there are a LOT of them. The Garmin and Google Maps wouldn’t let me go anywhere without them. I kept getting on freeways and then exiting onto other freeways and then turning onto still different freeways and all in all it made me dizzy. Stay in the left lane, then turn right, the Garmin would intone and I would try really hard to obey. Every time there was a traffic jam – which was about every third time I got on, so not as much as one might think, really – I would breathe a huge sigh of relief: I could finally look around.