I decided to split this into two parts because I was, after all, there for eleven entire days. That is the longest I have stayed anywhere on this journey but it was Christmas and it was family and so of course it was not really in LA 2017 but instead in the holiday vortex that is a string of unbroken Christmases. Was that the year we got the fencing gear? What house was that? Don’t Fred and Wilma remind you, too, of Mom and Dad? 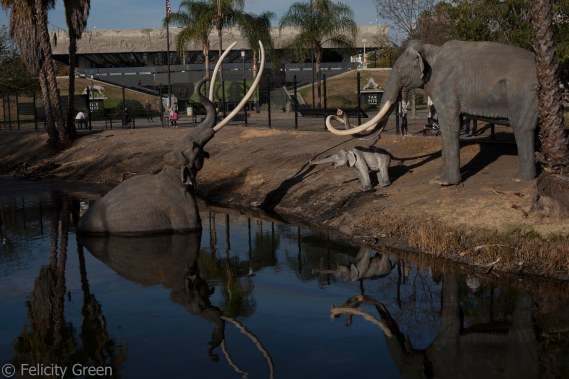 During breaks from Christmas, though – and actually we didn’t really DO Christmas per se, I got my brother a large cactus (I’m obsessed with cacti now; I even got one for myself, like I need another thing in this tiny camper and not just a plant at that but one that will try to hurt me any chance it gets) and a string of lights and he found another string of lights but that, an exchange of books and movies and the key lime pie was about it, Christmas-wise – I went to museums. It turns out that all the art in the world is in LA. I sort of knew that but I was not expecting to turn a corner in the Huntington Library and Art Museum and Gardens and come face to face with Ghirlandaio, who I haven’t seen since History of Renaissance Painting in college. The art I saw was amazing and I only made it to the Getty and the Huntington. I meant to get my lazy ass to LACMA and ICALA and the Norton/Simon and so on and so forth. LA is full of art museums! But I am difficult to motivate and slow and I ran out of time. I did go to the Museum of Jurassic Technology, which I will recommend almost as heartily as I recommend Meow Wolf, which it resembles, although it’s a less kinetic, more melancholy and thought provoking experience. I also walked around the La Brea Tar Pits, which, get this, are actual tar pits. Yes! They smell of tar! And I suppose if they were not fenced off they would be full of, hmm, coyotes perhaps and pigeons and squirrels and the occasional unwary tourist child. I didn’t quite realize, despite having heard of them all my life, that tar is a natural substance that occurs in, yes, pits. I thought it only occurred in smoking barrels tended by roofers. Anyway, it was pretty cool. I didn’t go into the museum because I’m cheap and time is fleeting, but I wandered around the grounds for a while being mildly amazed. 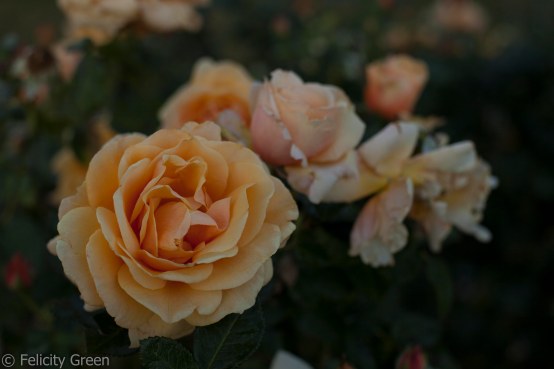 I spent several hours walking around the Huntington gardens. I cannot get over this California thing of roses in bloom all year around, I mean, roses! In December! It is like a miracle. My mother, who loved roses and grew them well and loved old books and art and old houses, would have loved the Huntington with all her heart. I got a bit overcome by this thought while I was walking around the gardens but, you know, botanic gardens are a really good place to go and have a quiet cry. The Japanese garden and the Chinese garden were absolutely breathtaking, or, as my daughter said when I texted her pictures, “I would just live there and write bad poetry all day long.” I would too. 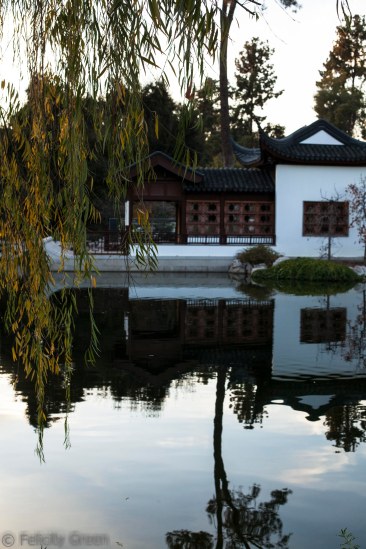 I had hoped to do some shopping, but while other people in LA may go to Rodeo Drive, I went to several different Whole Foods and FOUR bookstores. The Whole Foods in Pasadena has a shopping cart escalator. You ride up or down on one escalator and your buggy (as we say in WNC) rides up and down right next to you. It was great! I was so utterly enchanted with this technological marvel that I made a video and posted it to Twitter. My brother, who is cooler than I am, was mortified. The bookstores made me happy, as bookstores do, and I picked up the new Neal Stephenson (it was just okay) at Vromans in Pasadena, which is big and shiny and an early Donna Leon (it was great as they always are) at The Last Bookstore, which is not shiny but is big and has a hipness quotient of eleventy million. Alias Books East netted me Lud-In-The-Mist by Hope Mirrless, which is a 1926 fantasy I have been meaning to read for a long time and at Stories bookstore in Echo Park, small, also very hip, I only had a glass of wine. I wanted to see the empty freeway from Repo Man where they start to have a fight with the rival repo men and the health food store from Valley Girl but it turns out my cultural references are out of date and it is not the 80s anymore. 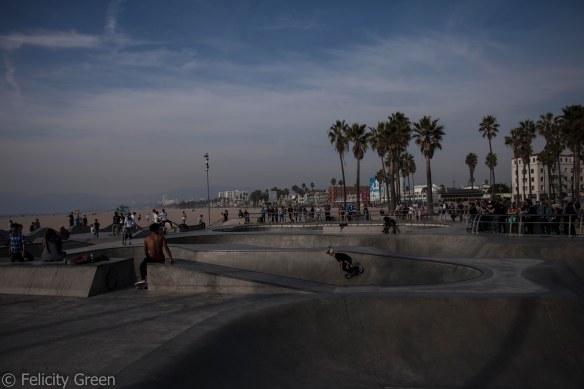 Even on Venice Beach, it is not the 80s anymore, although they are giving it the old college try. I loved Venice Beach. The canals were beautiful in a sort of crazy, who thought this up, this can’t possible work but wow, yes, they do! sort of way, just as I had always imagined them (I think it’s a Ray Bradbury book about a private eye who lives there? I don’t know but they seized my imagination at some point and never let go.) There was a skate park on the beach. There were the obligatory awful beach souvenir shops, with even nastier T-shirts than the ones on the East Coast. There were any number of freaks and weirdoes and a young artist I talked to for a while and a Rasta dude who sold me a CD I’ll never listen to: the people watching was primo. And the beach itself is beautiful. It was a great way to spend Christmas day.

So I went to LA hoping to take a selfie by the Hollywood sign. It turns out that you cannot get

to the Hollywood sign without a hike – damn! I thought you could drive there and sit by it and drink whiskey out of a paper bag and wax philosophical and noir and I was quite looking forward to it – and I never quite summoned up the time or energy to hike there. You can see it from Griffith Park though, and from a few other places through your windshield! It is, I must admit, exceedingly cool to look up and see HOLLYWOOD in white letters, right there like you’re in the movies, probably, in my case, some indie thing about families and holidays and melancholy with a soundtrack by Jane’s Addiction. Cities turn out to make me pretty lonely. I’m okay in the countryside – in fact I’m delighted in my solitude – but wandering around alone in the city makes me sort of anxious and sad. Everyone seems to have an errand except me and the landscape is designed for couples. I went to eat at Grand Central Market downtown, which reminded me very much of Mexican mercados and probably was one at one point, but even there I felt awkward and out of place alone. This did not, however, stop me from having a mushroom pupusa and a horchata at a Salvadorean stand. The pupusa was delicious but not as delicious as the ones at the Sunday farmer’s market on Glendale Avenue, pro LA tip from a tourist who hopes she can make it back some day.