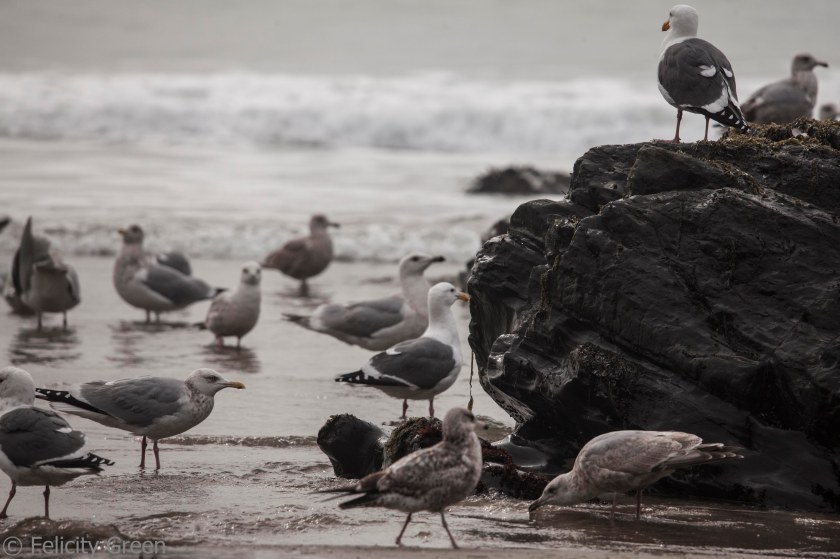 I am in Anchor Bay, which is a tiny tiny town located about three miles north of the only slightly larger town of Gualala, CA. I like it here. I am right on the beach, as in this is basically the view from my camper window and it’s cheap and it has REAL WIFI like I haven’t had for months and it’s extremely chill and all in all, I have decided to stay a few more days. Which may even be extended, who knows? Portland, I’m going to be late.

Also, I got to watch drama this morning! Drama straight outta Blue Planet or Planet Earth! Drama that needed only David Attenborough to make it complete.

I was sitting here this morning drinking my coffee, watching the ocean and finishing the last of the Ben Aaronovitch books when I noticed the surf scoters, who are black ducks that hang out along the California coast, all starting to freak out a bit. Then, they lifted up as one from the water just as a black shape lunged up from below the water. Naturally, I was not outside with binoculars let alone the birding lens, but I immediately, or as immediately as possible given that the damn thing is kinda huge and unwieldy, put the new lens on the camera and dashed out to watch. The scoters settled back into place. They are too far out, really, for even the new lens to get them, hence the blurry picture. .I might have a better one from Morro Bay; I will see. Also there’s at least one other kind of duck out there with them but 45 minutes with Peterson’s Field Guide to Birds of Western North America has totally not helped me figure out what the hell it is. It’s a lot smaller. There are small black diving ducks all along the coast and I thought they were all surf scoters but I may be wrong, because the ones here are bigger and they have the face patches that Peterson shows. However! It does not matter! Whatever it was that spooked the scoters was apparently successful in its hunt, as about three hours later I noticed another commotion: on the beach this time. 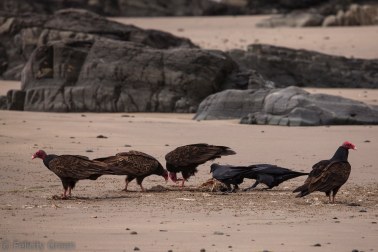 There is a pair of ravens who live at this campground, or just above it. We know how I feel about ravens (hint: I have two crows tattooed on my arm already and I am lining up an appointment in Portland with an old friend to get a whole bunch of ravens added) and their friendly presence is another reason I’m sticking around. Anyway, they were down on the beach going mano a mano, or rather wing a wing, with about four turkey vultures. What was left of the sea duck had washed ashore.  IS THIS NOT THE COOLEST FUCKING THING EVER? The ravens are like half the size of the vulture but they have about fifty times as much attitude, so they were just hopping in, grabbing hunks and hopping out again while the vultures were all, wait, what just happened?

And meanwhile, more seagulls than I have yet seen here –  a LOT more, because until now there’s basically been, like, five – have all settled on the beach. There are waterfalls coming off the cliffs here and an entire little mountain stream that runs alongside the campground and onto the beach and the gulls are all taking the opportunity to grab a freshwater bath. This is, by the way, extremely cute: I like seagulls and I do not care if you think they are rats of the sea. None of them are showing much interest in the dead duck, except for one juvenile gull who made an attempt to get over there but was handily chased away by the vultures.

So, in conclusion: THIS PLACE IS AWESOME AND I AM NOT LEAVING ANY TIME SOON.