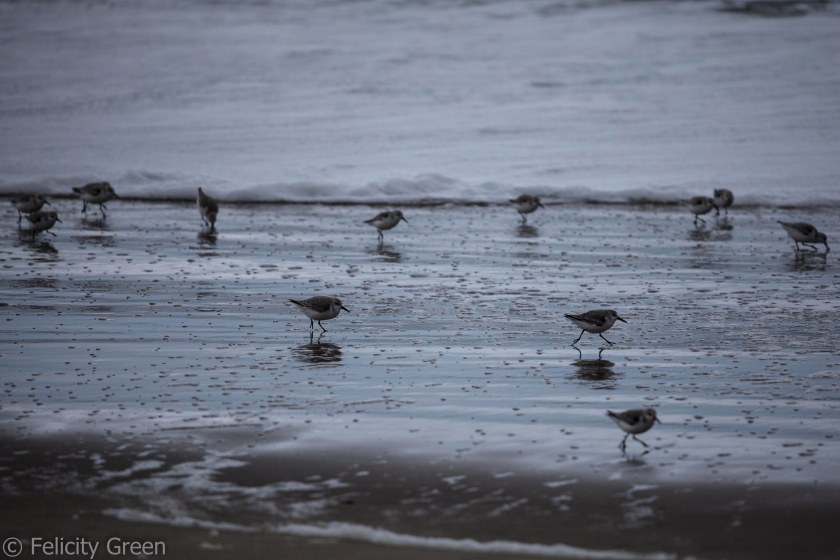 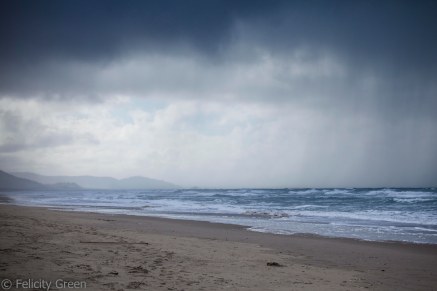 I spent two long gray cold rainy days at Nehalem Bay State Park – and two sort of half days, that’s what happens when you travel – and it was awesome. I loved it. The campground, another fantastic Oregon State Park, was huge and almost completely deserted. Oregon State Park campgrounds have it DOWN. These are just the best parks. They’re laid out sensibly and there are SINK DRAINS, large round stone constructions with grates on top which I have never seen before but which make it so easy for me to stay a while – I can carry my dishpan out and pour it into the drain, rather than filling up the waste tank! There is electricity and water at every site, the showers are nice and don’t even need quarters and while the campsites are not cheap, at $31 they’re cheaper than the private parks and, as we know, twenty entire bucks at least cheaper than California, so I am still weeping tears of gratitude for that. They also all have yurts you can rent and I want to get inside one but so far I have not managed it. And they have a little soupcon of danger – at either Bullards Beach or South Beach there was a warning that bears had been seen in the campground and at Nehalem Bay? That warning is for COUGARS. Damn. The recommended course of action is the same, by the way: make yourself look large and tough, pick up your small children, fight back, make a lot of noise and don’t hike alone. I’m cool on all of those except the last but I was still surprised – bears and lions on the beach? Good lord. This is definitely not the East Coast (granted there is the occasional lost alligator in Charleston but still) and I’m not sure but what it might not be Oz or something. BEARS AND LIONS AND SEALS, OH MY!

The beach at Nehalem Bay was wide and sandy and right over the dunes from my campsite. It was lovely and empty and raining squalls on and off but in a surprisingly smart move I was wearing my rain coat over my sweater and hoodie, so that was okay too. I went for a two hour walk the first morning along the beach and found clear jellyfish everywhere like tiny lucite sculptures in the sand. There were flocks of extremely hurried tiny sandpiper looking birds rushing by on their way to work or something. There were mountains in the distance on two sides and fog banks AND a rainbow, damn. And I found a perfect coil of rope – line, I mean, sorry Dad – in perfect shape, so, yay! I mean, one can always use more rope. Line.

At the end of the regular campground is HORSE CAMP. I have gotten weirdly obsessed with horse camp, which is really just a (primitive – no electricity or water at HORSE CAMP) campground where you can bring your horse. There are 2 stalls at every site made of heavy round rails, which look nice and I love them although I am a little unsure why you wouldn’t just put your horse back in the trailer where there are less bugs? The main thing is the notice at the sign in kiosk that says sternly MUST HAVE A HORSE TO CAMP AT HORSE CAMP. For some reason I find this sign utterly charming and hilarious and I keep saying it. Sometimes I sing it. My brain: it is a strange place! 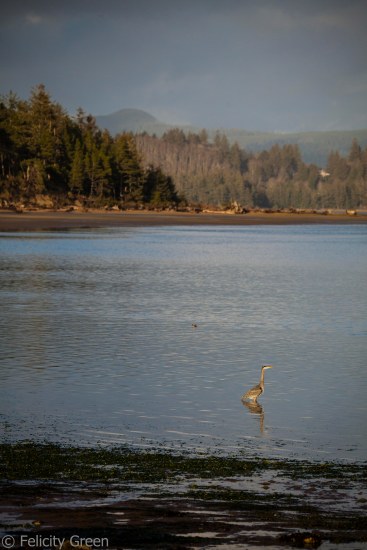 That same afternoon I walked the other way – through HORSE CAMP! – to the boat launch at the edge of Nehalem Bay. I got a little worried about the cougars (of course I did) but then I decided no self respecting cat would be caught dead in the sort of on again, off again rain and fog and drizzly mizzle that I was currently enjoying. There was a heron at the boat launch and I took a lot of pictures of him as he ignored me and went about hunting, apparently unsuccessfully, poor heron. There were also ducks, regular ducks and mysterious black ducks and I think a cormorant on a post and the usual seagulls. Seagulls, it occurs to me, have the same relationship to signposts as cats do to boxes. If they fits, they sits! There were also lots of crab shells and I’m so grateful to the Oregon Coast Aquarium in Newport for informing me that that doesn’t actually mean the crab is dead! Like snakes, they shed their skins. It always used to bum me out a little, so many dead crabs, so sad. But no! Instead, the sea is full of HUGE CRABS. They just keep on getting bigger! I momentarily am wishing people did that but you can see that it would clutter up the landscape quickly. Still. GIANTS.

I may just be in love with the Oregon coast, I have to say. I’m writing/editing this from Portland – I’ve been here about four hours and I already kind of want to flee right back to the ocean. I’m sure Portland is nice – I haven’t left the trailer park since I got here; I am lame – but it’s not the ocean. Nehalem – I have no idea how to pronounce it but no matter how you do it’s going to sound like a cross between the Bible and an early Steven King story, so, fantastic in other words – is about perfect. The trees are gnarled, the wind is fierce, there are seals and sea lions and puffins – OKAY I CANNOT GET OVER THIS! PUFFINS! LIKE THEY ARE REGULAR ANIMALS YOU MIGHT SEE AT THE BEACH LIKE SEAGULLS WHOA OREGON JUST WHOA. – and huge crazy rocks and cliffs and beaches and waves – everything one could want or need, really, including a couple of promisingly diner looking restaurants and a hippie gift store full of organic honey and bamboo scarves. I like it a lot, is what I am saying. I want to send it a note in third period math class. Hello Nehalem happy Valentines Day I like you do you like me yes / no?

Yesterday, which was Thursday, I went to Cannon Beach, which is about 12 miles north of Nehalem, very nice and fancy (and smelling strongly of money) but, whatever, it has huge rocks and tidepools on its wide and sandy beach! It was beautiful. I went to the far southern end and puttered around in my boots to my hearts content. I almost got swept out to sea by a sneaker wave! There are signs warning you about sneaker waves all the way from San Francisco on north – do not turn your back on the ocean, they say sternly, as if the ocean was, like, the Hamburglar – and I didn’t quite believe in them. But then, there I was, intently taking pictures of anemones when suddenly there was water everywhere and it kept getting deeper. The tide is going out, I said to the ocean, you’re not supposed to be doing this. Ha ha gobble gobble! replied the ocean, sounding just like the Hamburglar, and the water came to about a centimeter below the tops of my boots and tried to knock me down before it relented. I saw huge red and purple starfish and gooseneck barnacles and many, many anemones and several hermit crabs and lots of happy dogs. And then I went back over the mountain to Nehalem and thought you know what? I like it here SO MUCH please do you like me yes/no? And I hope I get an answer, somehow.

First 18 days of January, starting with the trail by the fish hatchery, continuing through what I like to think of as “Elk ladies who lunch after mass”, a rain squall coming ashore, purple clouds over the river and ending with two crows yesterday at Clatsop Spit. My favorite are the sanderlings in the middle. 😃remember any of these can be printed & yours to own, consider this exciting possibility! and /or I have a tip jar here ko-fi.com/flissvert- I hate to ask, but my long lens needs sand extraction surgery and it is not gonna be cheap. Your donation will help bring back actual clear pictures of bald eagles! 😝 #oregoncoast #naturephotography #canonphotography #landscapelovers #waterfall #birds #birdsofinstagram #birding #ocean #clouds #astoriaor #columbiariver #elk
#latergram from last May - more beach eagle action! 😝 here’s an eagle actually catching a small fish and then bringing it back to shore. This is about a mile? Maybe 2 miles max from the ocean beach where I saw the eagle yesterday. Could be the same eagle! Not the greatest pictures ever, did not have my good long lens on so they are cropped way down, but still, here is a #baldeagle fishing in the #columbiariver , always a sight to see! 😎 #naturephotography #wildlife #birding #birdingphotography #canonphotography #raptorsofinstagram #eagle #oregoncoast #pnwonderland #astoriaor
Winter storms & king tides bring up a lot of driftwood and kelp. . .and plastic. ☹ I pick up as much trash as I can carry every day I'm there, and sometimes it just feels so futile. Here, 1) today's catch, 2) a beach view, - how much plastic can you spot? Its like playing Wheres Waldo only more depressing - and 3) a short non trash focused video because not all is bleak. #ocean #trash #plastictrash #cleantheocean #oregoncoast #beachcleanup
Here are 2 first thing in the morning phone pictures of my cat Okra who feels that if I am unforgivably not making breakfast already I should at least be petting her. 🤣 #catsofinstagram #cat #siamesecat #oldfatcat #phoneography
I have had this phone since last March and I only just now discovered it can so slow motion videos! Therefore I present to you today's walk - only slower! Some of it anyway! 🤣🤣😎🐕 #dogs #beach #dogsonthebeach #slowmotion #unheraldedworkofcinematicgenius #oregoncoast
A picture perfect New Years Day hike at Cape Disappointment - the omens say the year is going to be volatile; in the hour and a half we were there i saw 1) blazing sunshine 2) clouds and fog 3) pouring rain 4) high winds 5) a little hail so it was an exciting walk, is what I’m saying. 😄☀️🌦🌤🌧⛅️⛈💨🌪🌈 #washingtoncoast #beach #walkonthebeach #lighthouse #clouds #postcardperfect