I have gotten ahead and behind myself, simultaneously. I don’t know how I managed to spend

six long – very long – days in Boise, Idaho without writing a blog post about it, but I did. And it was not because I was having SO MUCH FUN. Boise is, well, lovely, I’m sure, and just not really my thing. It is possibly the most whitebread place I have ever been and I live in the Appalachian mountains. I could not, somehow, get the hang of Boise. It may have been the time of year: the weather veered from wonderful to awful and back again, almost every day. It may have been the RV park, which I did not like with no good reason.

However, Boise DOES have the World Center for Birds of Prey! I went there and it was fantastic. At first I was a bit underwhelmed – well, the view was great – but then there were eagles and condors in cages and even though I recognize that, first, these are all birds who for one reason or another cannot be set free and, second,  the condor breeding program there is one of the main reasons if not THE reason we have wild condors at all anywhere, still it hurts my heart to see them in cages. And the bald eagle cage is. . . it could be bigger, is all I’m saying. A lot bigger. But they do have a really great education center and I used to be a museum educator and it was truly a good one. Plus, I got to go to a kestrel demonstration and I learned SO MUCH. Kestrels are tiny! They are tiny but FIERCE, like Amelia! And they are everywhere, as in they are not at all uncommon; you have almost certainly seen one and so have I. Isn’t that cool? They’re like stealth hawks! They hang out alone on telephone wires, so look for them there.

After I left the World Center for Birds of Prey and, of course, their gifte shoppe – I would like to gently ask them to get hold of a better T-shirt designer if they’re reading this, by the way, I was all set to buy a t-shirt but they were all so awful I had to settle for a remarkably ugly coffee mug and a bumper sticker that says I LOVE VULTURES – I went on and drove about an hour to the Snake River Canyon and Morley Nelson Snake River Birds of Prey National Conservation Area. Well. It was fucking amazing. I had the BEST AFTERNOON. I hiked around first at the top of the canyon and then at the bottom and I saw, oh, I don’t know, maybe ten or twelve raptors? Prairie falcons, what might have been a peregrine or two, at least one kestrel, some turkey vultures. I

couldn’t get pictures of most of them because even my fabulous birding lens cannot reach that high but I saw them and it was enough! It was just a tremendously wonderful afternoon. I also found a fabulous free campsite at the canyon but I was stupidly already locked into the RV park from hell and, as I have sadly mentioned, heading East. I am heading East now. I have to keep repeating that at myself.

So I went back to Boise and tried to work on my pictures. Sitting in an RV Park you don’t like in the cold rain – and eventually snow, but that’s another blog post – looking at pictures of Morro Bay is just . . . oh god. And it’s not THAT far from Boise Idaho to Morro Bay, California, one of the most beautiful places on earth, with otters. Otters who I never took a good picture of because I didn’t have my fabulous birding lens yet. But now I do and I could go to Morro Bay. . .

It was close. I almost headed west again. But instead I went to a wine bar. It was a very nice wine bar, full of white ladies of a Certain Age (like me) and Neko Case on the stereo. So, excellent music, but yeah, very white. Sigh. I had 2 glasses of Proletariat Cabernet, most delicious, and chatted with the bartender and then with the young couple next to me. They had been thinking about moving to Asheville but had decided against it because it was, surprise, too expensive. The bartender had recently turned 40 and was feeling a bit blue. It was a nice evening. Then I went back to the RV Park, which, like all of Boise was Nice. Too nice. Well, not nice either, there are no picnic tables and the Rvs are jammed together and everything is made of gravel so any time anyone drove in or out or even walked by – which was all the time because the place is huge and full of permanent residents – it made a ton of noise, crunch crunch crunch. Ugh, ugh, ugh.

And that is about it for Boise. On one afternoon walk I met a lady named Connie whose daughter was a professional photographer and her other daughter was really good too. She was very nice, had a nice dog and recommended that I visit the old Idaho State Penitentiary, where, she told me, there were ghosts, particularly in the hanging room. It didn’t close, either, she said, until 1973! That is too late for me. I don’t much like looking at prisons – they break my heart and wrench my soul – but I can handle the really old, historical ones. 1973 is too close to home. I was alive in 1973. Granted, I was still having trouble with long division – well, actually, I still am, come to think of it, although fortunately it doesn’t come up much – but I was around and so that’s just too close somehow. I can’t handle it; I get too sad. 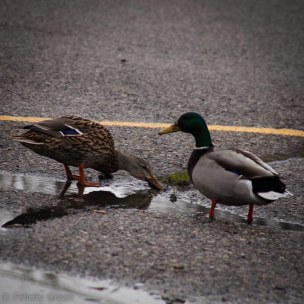 The thing I will always remember about Boise, though, is the ducks and geese. Mostly the ducks. I have never in my life seen so many ducks. There are ducks walking alongside the roads. There are ducks by the hundreds in the river. There are flocks of ducks, couples of ducks, single ducks, ducks hanging out with flocks of geese trying to look cool, ducks paddling in puddles even though there’s a river right there – just more ducks than one city can absorb. I hate to be duckist – but man, that is a LOT of ducks. If they ever rise up? Boise is done for. Be safe, Boise! Watch out for those ducks!