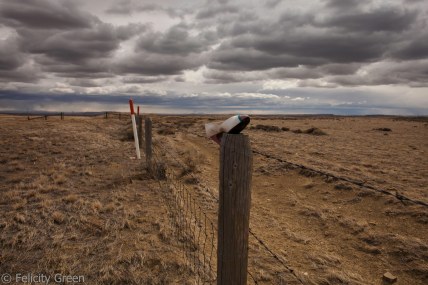 So, as has been recounted, I left the Red Desert Rose and headed on eastward, ever eastward, to Curt Gowdy State Park. I ditched the interstate and took the back roads and it was just as much nicer as I thought it would be. Route 30 runs alongside I-80 for much of its length and it’s infinitely more scenic and relaxing. Route 30 from Rawlins to Laramie is great. There are mountains and endless rolling plains – I tell you what, I thought rural New Mexico was deserted? Rural Wyoming makes it look like Times Square on New Years Eve. – and not one but three tiny almost ghost towns: Medicine Bow, Rock River and Bosler. I should have stopped and taken pictures. There were deserted or almost deserted motels that would have made for amazing images but something about stopping and photographing an obviously destroyed area always makes me feel guilty, like a rubbernecker at a traffic accident. So I didn’t stop and, of course, I’ve been regretting it ever since. It is rough when your preferred aesthetic of ruinous decay clashes with your way over developed social conscience. And also when you’re a chicken and it’s a giant pain in the ass to pull over in a truck and camper, there’s that too. I did however pull over once to take some pictures and discovered a shoe on a fence! Yay! I am delighted with that shoe and with whoever left it there and I hope it stays forever, slowly

getting more and more photogenic.

Curt Gowdy State Park is a very nice, surprisingly developed – there are tons of campsites, lots of trails, multiple playgrounds and a super fancy visitor center with a stuffed mountain lion – state park in what at first seems like complete wilderness. Then you slowly realize that there are in fact some houses around. Still, it was pretty deserted. I met the ranger and the sheriff at the visitor’s center on my way in. They both went to great pains to tell me that I was going to be safe, so safe! That kind of backfired. I am not usually nervous in state parks but there were only two other campers. Still, it was lovely, and I unhitched and everything, settling happily into my chosen campsite right by the lake and the geese, planning to stay for two days, through the predicted winter weather that was fast approaching. I was going to take a day off the road and 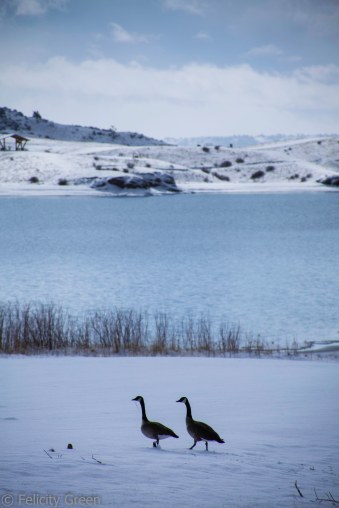 go hiking and not think too hard about mountain lions or the almost total absence of any other people at all. And until about 3:00 on Saturday that plan was going nicely. It was very cold. There were a couple inches of snow on Friday night, but it all melted off by around 1:30. The wind though, was getting a bit intense. So I fired up the bit of the internet that I could get to and googled, just to see yet again, how much wind it really takes to tip a camper. I’ve never before managed to get an answer to that but this time, I did: 53 mph, if the camper’s small (check) and unhitched (check) and the wind is broadside on (check. . Oh fuck.) I looked at the weather again and the latest winter weather advisory had gone into red alert mode with wind gusts of 65 mph expected that night, just, you know, to enhance the single digit temps.

Reader, I chickened the hell out. I packed up my stuff and hitched up the camper and I was on the road – the windy road – in 45 minutes flat. I got myself onto I-80 and I drove down, down, down the mountain until I ended up exhausted three hours later in an RV park behind the Cabela’s in Sidney, Nebraska. There was an Applebees in walking distance and I duly walked there and inhaled the worst yet best Irish coffee I have ever had.

Cabelas, in case you do not know (I did not!), is a big chain of outdoor / sporting goods stores that welcome Rvs. Usually, they just have a parking lot for them but this one, which is apparently the world headquarters, has an actual RV Park with hookups and, I must say, I have seen worse. The Cabelas water was turned off for the winter, but there was electricity. The showers though were worse than the Red Desert Rose – no, seriously, they were unreal. First off, they were unisex – just a row of booths in a big concrete room and you can lock the door to your individual shower booth but still. I don’t know why, actually, this seems weirder than the common state park arrangement of individual shower rooms that open to the outdoors, but it does. Anyway, the booths were very small and there was little room to dress. I happen to know by this time that at campground showers, everything gets wet (blame the Dwarves) and as a result I usually try to do the bulk of my dressing – the outer portions, if you will, the socks and the pants and the other things that get awful if your feet are soaking wet – in the middle of the ladies room. But, okay, tiny booth, I can handle it – if it had been cleaned since the Obama administration. But it clearly had not. Oh, so very clearly. I mean, I am not a clean freak. I am, to be honest, a complete slob. If I am telling you a shower is not clean? That means that the grunge on the bottom has invented architecture and is working hard on civilization. A little dirt doesn’t scare me. Sentient mold in six inch encrustations does. So, not wishing to risk Dread Shower Disease twice in one week, I didn’t take one. I hadn’t taken one at Curt Gowdy either, because the only showers there were at the Visitor Center and I was putting off driving up the substantial hill to them. LESSON LEARNED: IF THERE IS A DECENT SHOWER AVAILABLE, TAKE ONE. JUST TAKE ONE.

On Monday, then, grungy me got back into the car and drove, again down Route 30, from

Sidney to North Platte. We went to the I-80 Lakefront Campground, which had just reopened for the summer. They didn’t have water yet and, also, SURPRISE! There was a winter weather advisory and the temperatures were supposed to drop into the single digits. The campground was really nice – a big grassy field by a lake. There were geese in the lake and some small ducks I didn’t recognize, so all was well in my world: as long as I can see geese from my camper window, I am content. I took a long, long illegal walk along the river through what looks like it will sadly soon enough be either a golf course or a McMansion development but now is early enough in building stage where it’s just sand and mud and lots of deer tracks. I saw no deer but I did see. .

I had no idea what I was getting in for when I thought I would go see the crane migration. I didn’t even know they were sandhill cranes and not whooping cranes. But there I was on a dirt track in deepest Nebraska, happily hiking along looking at branches and river and so on when the most amazing noise, sort of like a million half awake kittens or an army playing combs wrapped in tissue paper underwater* began reverberating around me. I looked up and LO THERE WERE CRANES. And more cranes. And still more cranes. I had never seen anything like it and it blew my tiny mind. I took a million pictures and I took videos and I gawked and finally all I could do was just stand there and be amazed. 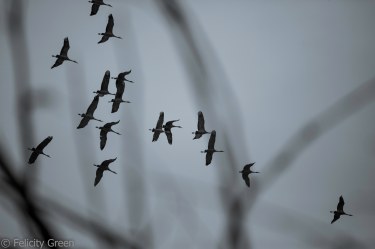 The next day it was bloody freezing and horrible and I stayed another day, still unshowered but warm enough. Around the middle of the day someone knocked on the trailer door. This never happens. I was shocked. But it was a nice man from the office come to tell me that they had decided to OPEN THE SHOWER BUILDING and even heat up some water! “Course,” he told me, “There’s no heat in the building. But I put a space heater in there.” After he left, I thought about it. A shower! In an unheated concrete building. It was, I believe, TWELVE outside. I decided that since I had already done a washcloth bathe and changed into clean pajamas, I would skip the shower but take one in the morning before I left. And this I duly did and I am here to tell you that although it was FREEZING OH MY GOD in that building, SO FREEZING, there is nothing like being naked in what the space heater said was 45 degrees, oh god, but the water was hot, the shower was clean and it was so, so nice to be clean too.